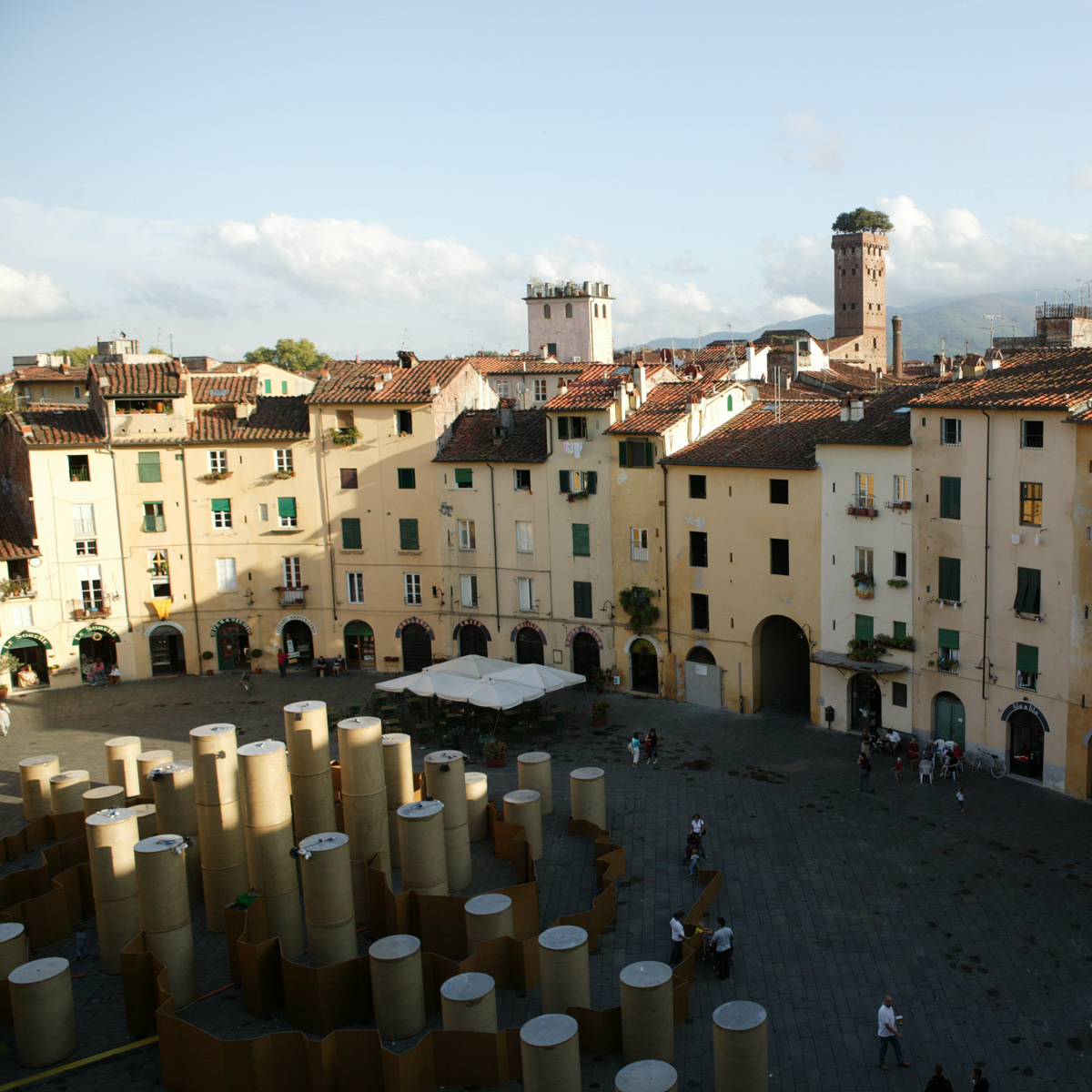 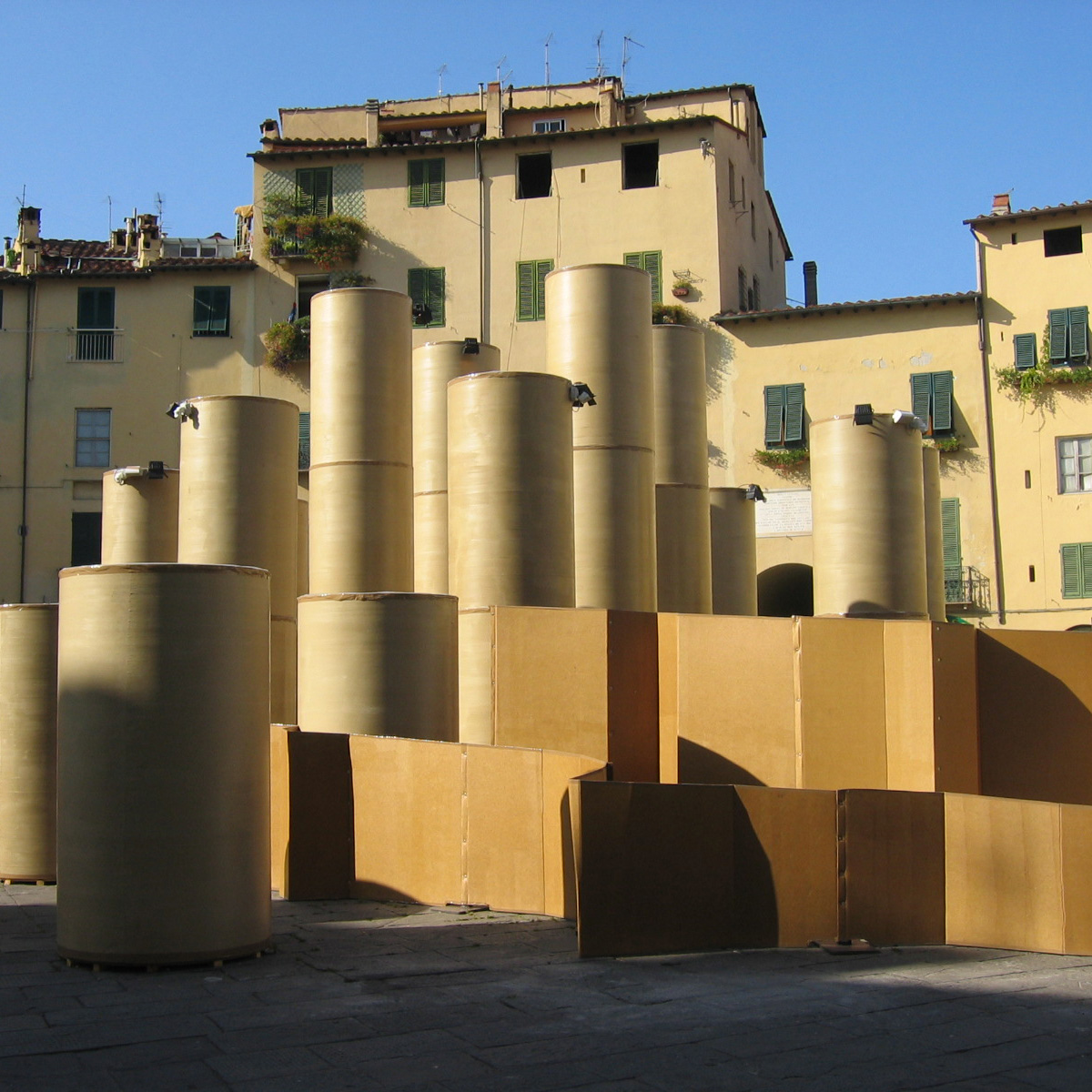 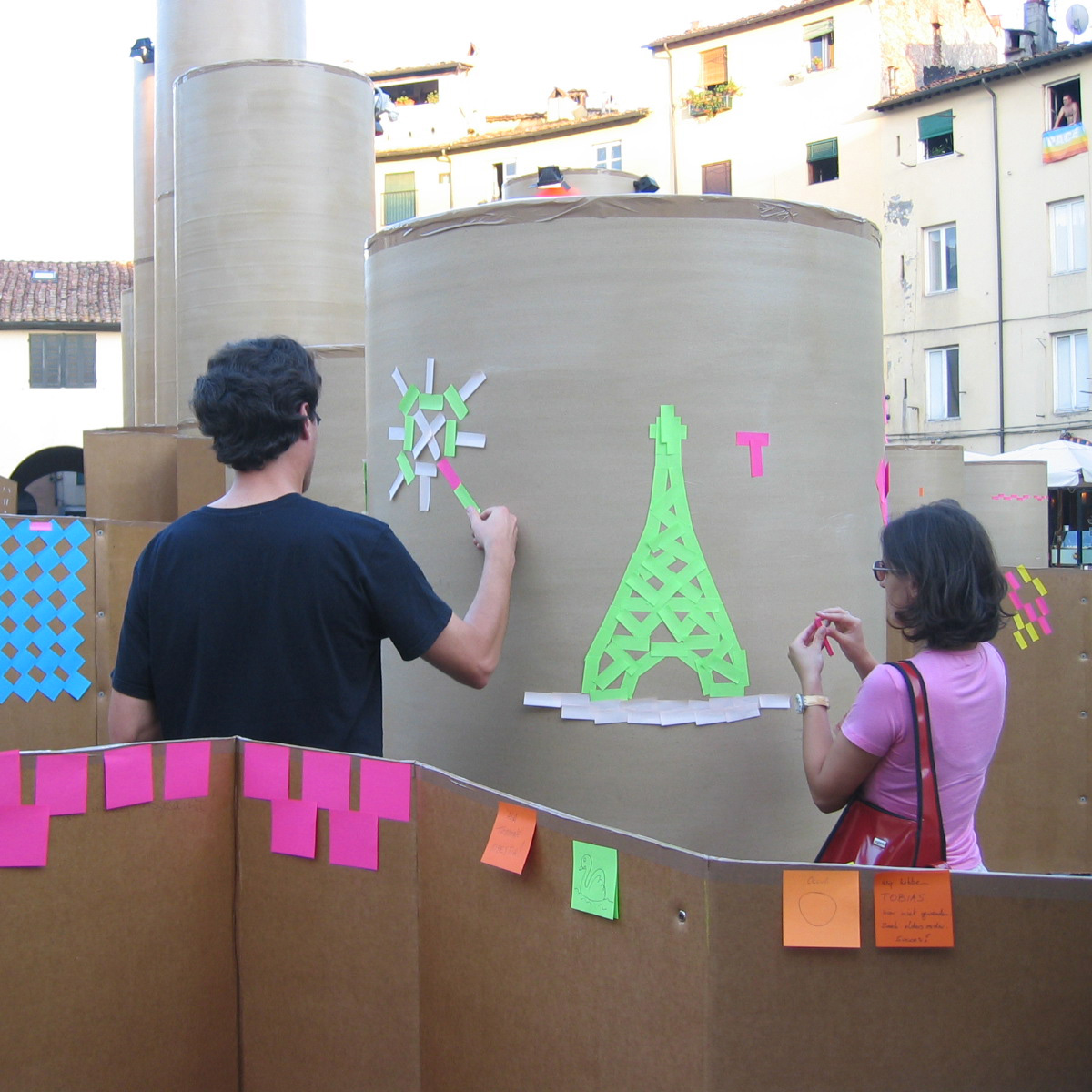 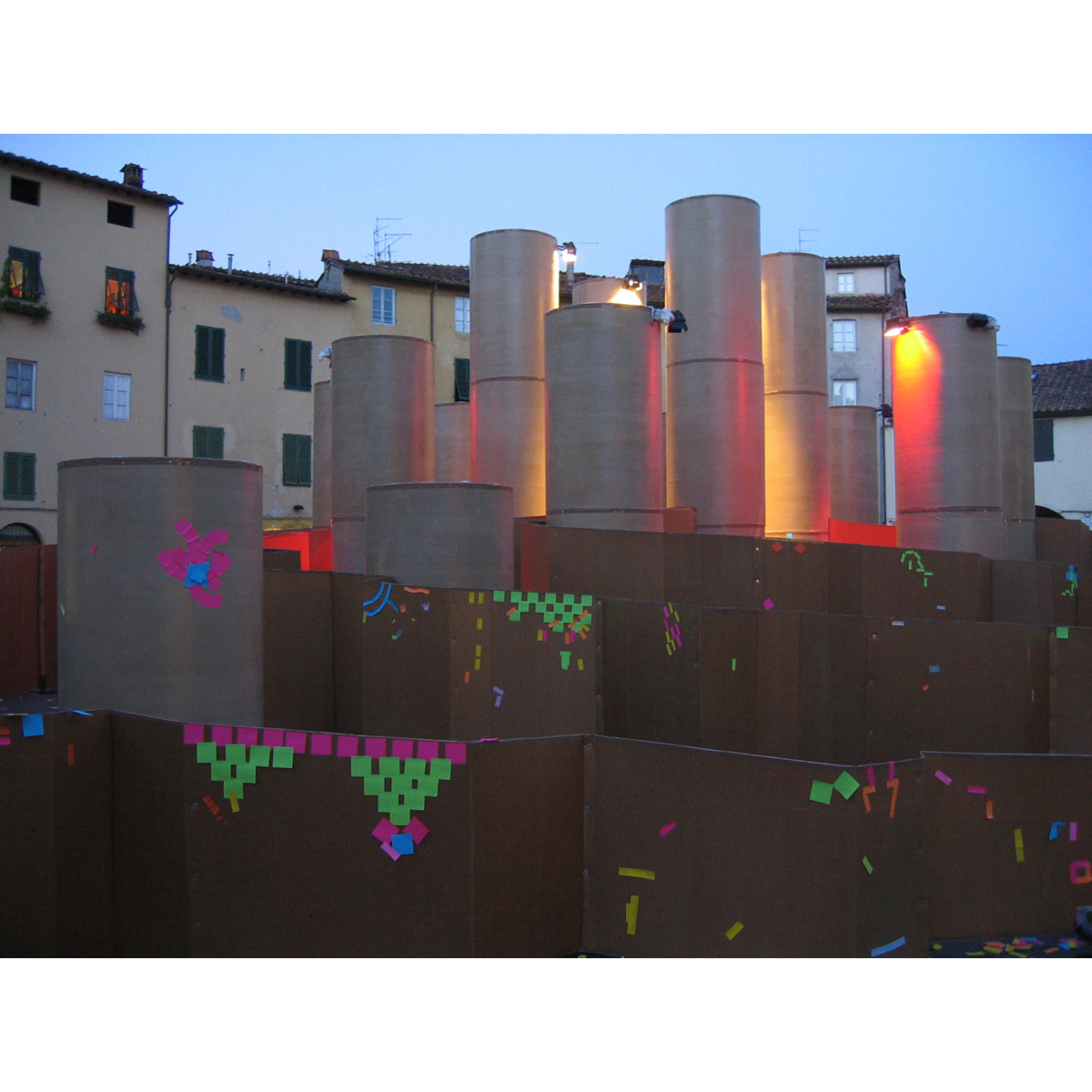 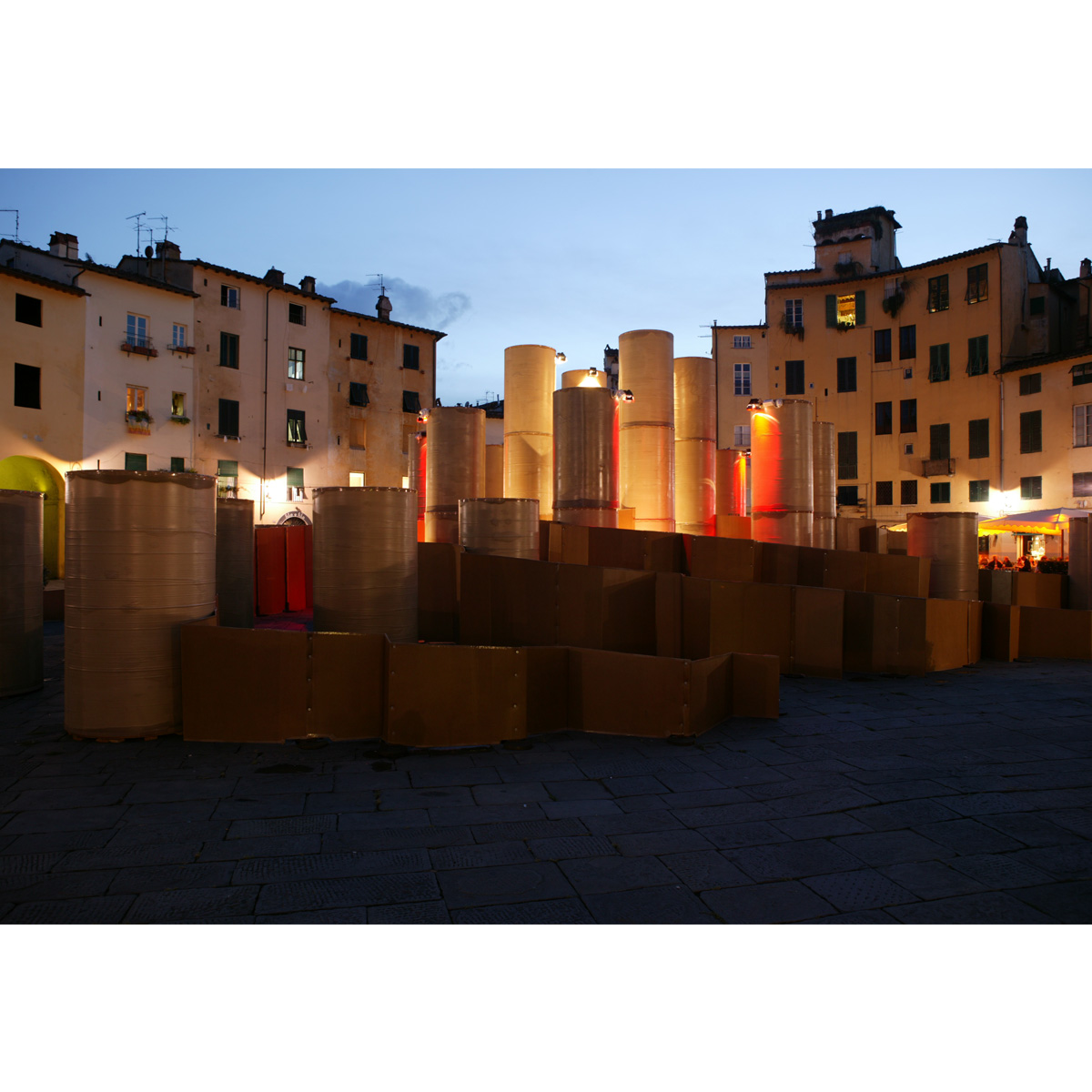 Concept: The city inside the city.
Cartasia 2004 - City of Paper - In 2004, the event took form in a huge interactive installation in paper and cardboard that provided a stylized representation of the city of Lucca conceived by French sculptor Nicolas Bertoux positioned in the city's most distinctive setting: Piazza Anfiteatro.
The theme of this edition was " The city inside the city".

Structure
Cartasia 2004 - City of Paper  built by copying the city of Lucca's original Roman orthogonal layout, the decuman gate and cardinal line cut through the installation vertically and horizontally to define the positions of the other elements.
The era's towers, steeples, and roof terraces were represented by reels of paper (each weighing around 2.5 tons) while the walls of corrugated paper recalled the outline of the city's famous walls, narrow lanes and alleys in its historical center.
The overall effect was one of a temple of columns inside an enormous labyrinth.
Approximately 120 tons of paper were used for the construction of Cartasia 2004.
Interaction
Positioned in a public area and on display for several weeks, Cartasia 2004 had a structure that could be traversed, written upon, and used directly by the visitor, who moved physically through it with the possibility for physical interaction: upon the visitor's passage, in fact, photocells switched on the sounds and lights that enlivened the work and its composite materials.
Collateral events
Concerts, performances, exhibitions, and projections accompanied Cartasia 2004  City of Paper - all through the summer:
August 31  London's Forest Brass Band in concert;
September 3 - Happening: citizens created Compositions and drawings on the walls of Cartasia 2004 using thousands of Post-it stickers donated by 3M in Lucca;
September 6-18 - "Remote Futures" photographic exhibition by Davide Sani;
September 10 - "Paper Stories" documentary produced by Metropolis Association;
September 11 - "Plutarch's Dawn" projection of video by artist Gianluca Cupisti.